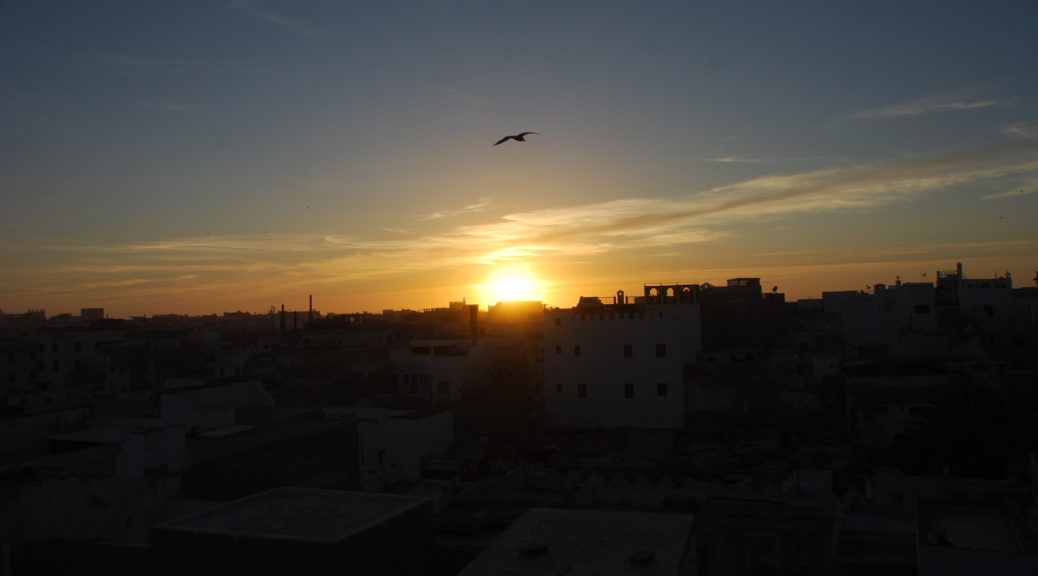 After Egypt, I headed east on a few hour flight to Morocco. I was excited about this portion of the trip because on my planning for my European trip I added Morocco on the list of places to see, but unfortunately never got the chance to go. Now two years later I was finally on the plane heading that direction. I had no idea what was in store for me once I was there.

As I stepped off the plane, I quickly realized that it was dumping rain which is rare in this part of the world. I stayed at the airport for a little bit waiting for it to die down. Once it cleared up, I found a bus that would take me nearest to my hostel and off I went. The bus took me in the middle of Marrakesh and As I was walking to my hostel, a man came over and grabbed my arm. Thinking that he was trying to take my bag, I quickly through him on the ground and put my knee into his chest. I was quickly picked up by a 7 foot tall black man and he frantically told me that the man was just trying to get me to go to his restaurant. As this played out, a crowd of people surrounded me and that friendly tall man got me out of the crowd and asked me where I was trying to go. I pointed him in the direction and he walked with me a bit until I got to the hostel. That experience made me stay at the hostel a lot more than usual. I asked the workers there what I should do While in Morocco and they suggested a two day tour through the Sahara and they also told me if I waited two days I could make it to the night with no moon where I could see as many stars as possible in the desert, so I told them to signed me up. I spent the next two days making friends at the hostel and taking little trips not far from the area with the new friends that I met there.

The day came for the tour which left in the morning so I had my bag packed and I sat at the front door waiting for them to let me know where I should go. Unfortunately the worker told me that they took me off the list even though I was one of the first people to sign up, they over booked the tour and took the last three people off the list, which was an alphabetical order. I was beyond angry and had no idea what to do at that point. Couple of my new friends heard of what happened and talked me into getting a taxi out of town and go to a beach town named Essaouira.

It took a couple hours to get there, but once I was there I immediately felt a lot better. We booked a hostel on the way. Only two of us were staying out of the four. The other two travelers were going back because they had to fly out a day or two later. The guy that was staying here with me realized that he left his passport at the other hostel and left with the other two, leaving me there alone. That night I started to talk with the other people around the hostel and some of us made plans to do a mountain bike trip through the area south of there. The next day came around and we all got the bikes and started off down the road and that’s when my bike decided to break. With me at the back, none of them realized that I was broke down and kept riding. I managed to fix it enough, but at that point they were long gone. I turned around and rode back to hopefully get another bike and catch up later which never happened because once I got the other bike I could never figure out where they went.

I turned the bike in and walked back to the hostel I told the people working there what happened and they laughed and told me that they would give me a deal for surfing lessons the next day because of the inconvenience. I have never surfed before and thought that it would be fun, so once again I signed up and sure enough, The next day rolled around I got my surfboard and my wet suit on and sat at the beach for about an hour until a young kid ran up asking if I was Jon. Apparently the guy that was going to teach me decided to sleep in and canceled all of his appointments for that day.

There’s a point where I get so angry that I’m not even comfortable about being around other people and I was definitely at that point. I got back to the hostel and told the people that left me out in the desert while mountain biking what happened. By chance, they were going to another beach down the way on a bus and asked me to join. I gave it some thought but I figured it was my last day, I should do at least something. It took us an hour and a half but we got this little beach hat and we got to enjoy the sand for a bit. I asked the guy working at the restaurant when the bus was going to return to take us back to the main town and he told me 5:30. Well, I had a bus taking me back to Marrakesh at 5:25 and That’s when my survival instincts kicked in and I started asking around the parking lot if anybody was going that direction. There is no way I was missing that bus because I had a flight to Germany that very next day. I managed to find A group of guys that we’re heading in that direction that were welcome enough to let me tag along. Now back at the hostel, packed my bag and rushed to bus which I got within minutes of it leaving.

Back in Marrakech , I found a hostel and set up a taxi for the next morning to take me to the airport. I started talking with a couple girls that were there about their trip and how they were from Germany. I was telling them that I was going to celebrate my birthday in Germany which was coming up, that’s when I realize what date it was and I didn’t have a flight the next morning, I was a day early. I quickly canceled the taxi that I reserved and spent my last day in Marrakesh as positive as possible.

Sometimes while traveling things aren’t going to go as planned in this unfortunate event everything I planned didn’t go the way I thought it was. Sometimes you just have to roll with the punches and remind yourself that no matter where you are when the plans become sour, at least you’re not working a 9-to-5 at a town that you can never leave and reaching for goals that you’ll never achieve. Morocco is a beautiful place and I don’t think that it had anything to do with my unfortunate round of events. I will definitely be going back to Morocco someday to give her another chance.