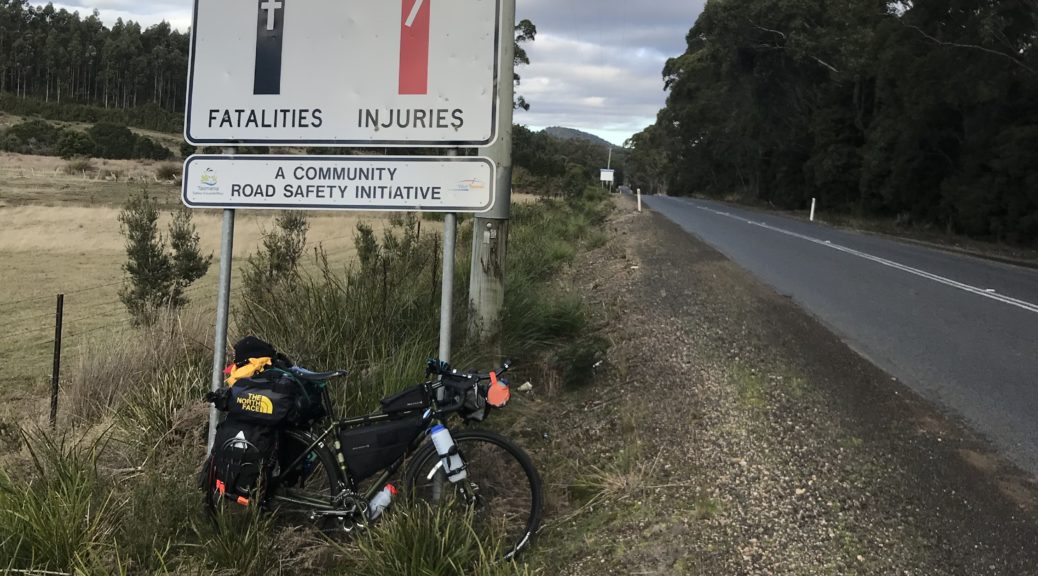 A trip shouldn’t start in the worst way possible, but sometimes you get dealt a bad hand. I spent 25 hours worried that the bike that I turned in at the oversized baggage in the airport would be lost or damaged on the flight over. I had hope when I got the box with the bike in it with no damage on it, but while assembling it at the Melbourne airport, my fears came true. With a calm head and a great bike shop helping me, it was fixed and ready for it’s first leg of this year long journey around the world.

Tasmania was an 8 hour boat ride in the dead of night welcoming me to a cold morning to ride into. The first day took me nowhere because of a few hangups with the setup of the bike. I managed to meet a fellow traveller in a camper that was named Kiran. She was a nomad much like me. She give up her job most of her belongings and set out to go and explore. With that in common we got along surprisingly well, which was an on going trend around the island.

There were three factors that I came across on this trip. One which was the hills. The thing about Tasmania is there’s nothing that is flat and with over 100 pounds on the bicycle and stock gears that aren’t meant for that weight, it became apparent real quick that I was going to have to suffer until I fix the problem. Those hills took a toll on my mental ability as well as my physical ability. After some close calls with big rigs through the hairpin turns and also having some four-year-old hissy fits, throwing the bike down and walking away from it as if I could do it on my own. Another factor was weather. I knew going in that it was the dead of winter in the southern hemisphere, but I wasn’t expecting it to be The worst winter in the last 10 years, as the locals would continuously tell me. I came across High winds, buckets of rain and even the occasional snowfall while trying to tent every night.

The last factor was the people. The ones that lived in Tasmania was probably the nicest people that I’ve ever met. Everybody from the people that would simply pull off after passing me on the road to ask me if I needed anything and if I was alright, to people like a beautiful 19-year-old girl that worked at a small coffee shop in a very small town. She gave up her half day off to take a road trip all the way to my next destination so I wouldn’t have to deal with the hills. When I asked why she would’ve done that she just simply said, “I hope one day somebody would do this for me when I’m traveling.” The generosity was endless on this island and even though I was having a miserable experience at times it definitely evened up the experience.

She dropped me off in another small town named Derby. At one time this was a drive through town with not much in it, now it is a mountain bike haven with miles of prime enduro trails and it even hosts the Enduro World Series. A perfect place to fix my gearing problem on my bike and chill out for a bit, but Evolution Biking had different plans for me. They did a special order on the new parts for the bike getting it there overnight and would have it installed within the next couple days. Knowing that I was going to be in town for a bit they just gave me an enduro bike to explore the hills around Derby for basically nothing, telling me that I have to see the trails while I’m all the way over here. So I spent hours out there getting dirty and having a blast making it one of the best days in Tassie. In return for the bike, I spent the next day washing all of their rental bikes and helping around the shop.

After the gears got installed on the bike and did some trial runs I packed the bike back up and headed off. my goal was to make it to a hotel in the town of Weldborough. This ride was dangerous because of the windy narrow roads that meanly uphill, but with the gear change, it was doable. I made it to the hotel and started looking for a guy named “Jon” which owned the place. I came across this place a couple nights before when a group of lovely people I met on the trails in Derby invited me to dinner. Jon heard what I was doing in Australia and wanted me to stay in their camping area in the back when I passed by. I found myself stay in the hotel for free instead for a couple nights and helping out around there and made friends with the staff. I knew that the last of the big hills were just up ahead and I didn’t want to tackle it with bad weather, so when the clouds parted one morning I jumped all over it. It was a struggle to the top and once there, the clouds caught up bringing the wind and rain. I sat at the top for a few minutes before heading down for a wonderful 10 miles all the way to the coast.

The east coast of Tasmania was simple beautiful with the Bay of Fire, the Chain of Lagoons and a town called Bicheno. Bicheno was a great place to see the ocean animals and taste the fresh seafood. Unfortunately I got a cold while there causing me to sit at a motel resting for a couple days. Once I started feeling better, I was on the bike again for the last couple legs of the trip in Tassie. Wind was a big factor on this day more then I wanted. The side winds were upwards of 60mph which was manageable until a semi truck flew by so close that it ripped me off the bike as if someone picked me up by the waist and threw me up. I landed in the middle of road and bike somehow stayed on the side of the road with no damage or so I thought. I tore up my knee and was bruised up a bit, but I got going again and dealt with the pain. A couple days later, I made it to Trabunna where I was going to just catch a bus to Hobart from there. That ended up going a completely different way as I found new friend with a van and drove that for rest of the trip which is a story all on its own.

The trip to Tasmania took a month almost exactly and the experiences I had were timeless because those hills that I complained so much about created breathtaking views around the whole island. The weather that I also complained about made crisp beautiful sunrises and breathtaking sunsets. As for the people, I couldn’t ask for more out of any of them.